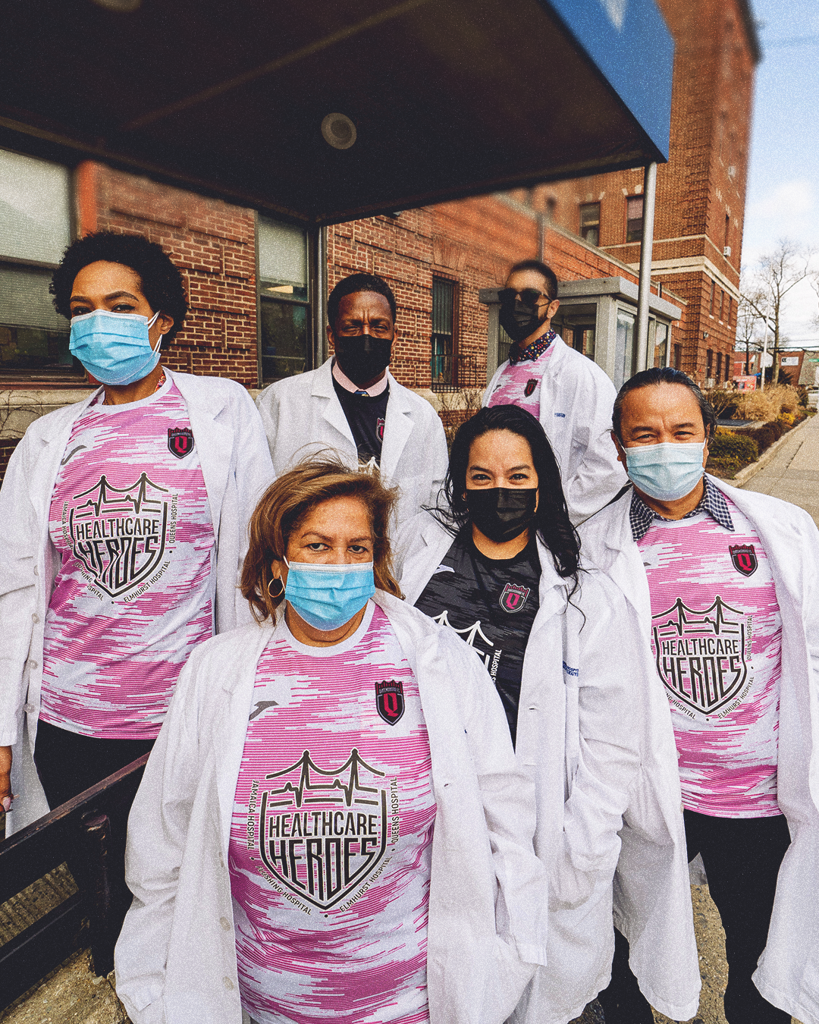 March 23, 2021 (New York, NY) - Queensboro FC (QBFC), an expansion club of the United Soccer League (USL) and New York City’s newest professional soccer team, today announced the MediSys Health Network, which consists of Jamaica and Flushing Hospitals in Queens, as its official and exclusive Founding Medical Partner. As a part of this inaugural partnership, QBFC has donated the entire front of its QBFC Academy jersey to the Jamaica, Flushing and other hospitals in the borough.

The QBFC Academy serves as a residency program and development system for America’s next generation of players - featuring both homegrown and international talent - and preparing them for selection to the club’s professional team, which will enter competition in March 2022.

Kicking off the partnership is the release of a limited-edition QBFC ‘Community Kit’ produced by Joma, a fundraising jersey that features a unique crest co-designed in partnership with a creative committee made up of local healthcare workers. The crest is inspired by the iconic Queensboro Bridge, outlining its towers and spans with a symbolic electrocardiogram (EKG) design element, with the words “Healthcare Heroes” as the logo’s centerpiece to celebrate frontline workers.

The jersey launches today, March 23rd, at the QBFC Shop and 100% of net proceeds will benefit the healthcare community that has been essential to the care and well-being of NYC residents throughout the pandemic and beyond.  All funds raised will support hospitals throughout the MediSys Network, as well as Elmhurst Hospital and Queens Hospital. These hospitals were at the epicenter of the COVID pandemic and treated some of the most critically-ill patients in the early stages.

An iconic pillar of the Queens community, MediSys Network has been designated QBFC’s Official Medical Services Provider. As part of their long-standing relationship with NYU Langone’s Department of Orthopedic Surgery, they will together bring forth doctors, trainers and other staff to provide comprehensive care to the club’s youth academy. As one of the nation’s top academic medical centers, NYU Langone’s excellence in clinical care, research and education will round out this unique partnership.

“We are thrilled to include world-class medical partners in the founding of our club, such as the MediSys Health Network and NYU Langone. We look forward to working closely with them to build an elite soccer team in Queens, to usher in the return of spectator sports, and to make meaningful contributions to the community,” says Adam Behnke, Chief Business Officer, Queensboro FC. “Thanks to their outstanding facilities and healthcare providers, New York City will soon be back in top form, and our players will be receiving excellent care on- and off-the-field.”

“It is incredibly inspiring to see QBFC, a brand-new player in NYC’s pro sports scene, already working closely with the local community,” says Dr. Sanjit Konda, Chairman of Orthopedic Surgery at Jamaica and Flushing Hospital and assistant professor, Department of Orthopedic Surgery at NYU Langone.  “Sports can have a wide variety of healing powers and we are excited to bring this partnership to life with programs that will benefit Queens residents, now and for generations to come.”

“It has been a pleasure working with QBFC to design their Community Kit and launch their new initiative to honor healthcare workers,” says Dr. Spencer Stein, Orthopedic Sports Surgeon at Jamaica and Flushing Hospital and assistant professor, Department of Orthopedic Surgery at NYU Langone. “This past year presented the healthcare community with many challenges, and QBFC remained steadfast to the cause by designing a program that would highlight the important work of medical professionals.”

Queensboro FC is the newest professional men’s soccer team in Queens, New York. The club will start playing in the 2022 season of the USL Championship, the top tier of the United Soccer League (USL).  Queens, often called the “diversity capital of the world”, is home to over 2 million residents, 150 nationalities and 130 languages across more than 90 distinct neighborhoods and 100 square miles. With soccer as Queens’ most popular sport – Queensboro FC aims to embrace and unite “the world’s borough” and honor the beautiful game in the streets, in the parks, in the community – and soon, on the pitch in its own stadium. Queensboro FC stands for more than sports, it is a movement for unifying people across the world. For more information about Queensboro FC visit: www.queensborofc.com.